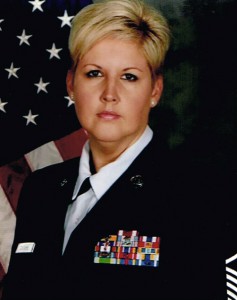 I knew MSgt Tara Brown from the beginning of our training to prepare for our Kabul deployment. In the fall of 2010, our paths crossed and I am so very thankful I was a part of her life for the short time we had together. Tara was a wonderful NCO, but also just shined from the inside out as a person. She exhibited all of the qualities that anyone would be so lucky to have. She was loyal, honest, and hard-working, compassionate, and had a wonderful sense of humor. Anyone who knew her knew how she sparkled and literally lit up the room. Her outlook on life was radiantly positive and you could not help but to delight in being around her. I always felt my spirit uplifted around her and found myself drawn to her personality and humor.

Tara was someone who took pride in herself and was always trying to better herself. If she was not at work, she was working on her education studying for the college classes she was taking online while we were deployed. And if she wasn’t at work or working on classes, she was working out, maintaining her physical fitness and encouraging others to do so as well. In the short “downtime” she allowed herself, she enjoyed being around her group of friends or talking to her family back home. On April 27th, 2011, the world lost a wonderful person. I lost a dear friend. Her family lost a wife, a daughter, as sister and an Aunt. She will forever be missed, but I am thankful for the time that God placed her on this earth. She has made a difference in this world and I am hopeful that I can continue to honor her.

In preparation for speaking at the Tara Jacobs Brown Scholarship Foundation banquet, I am reflecting back on Tara, how we met and what she meant to me. I met Tara in October 2010 while in a combat training course and preparation for the year long mission of training the Afghan Air Force. I was immediately drawn to her joy and light that she radiated, as were many others. We became instant friends and thus began our journey together.

Tara was an inspiration to many, especially the women participating in the Kabul Thai Tuesday Club, “building strong minds, strong hearts and strong women.”

During our tour in Afghanistan, I watched and admired Tara’s drive and determination for her work, her education and her future. She somehow seemed to be able to balance everything perfectly, including her personal life with her family over 7,000 miles away. Tara was dedicated to her duty, her fitness, and her education. I was amazed at how she was able to put 110% into everything she was involved in, and marveled at her energy. She spoke often of her sister’s children and her desire to ensure they had every educational  opportunity to succeed. Tara’s devotion to the online classes she was taking along with her encouragement inspired me to begin working on my education as well.

After Tara was taken from us on 27 April 2011, I knew that I had to continue to pursue my education just as aggressively as she did. I knew she would be proud. I have since completed two Professional Military Education courses as well as completed an Associates Degree.

I am so happy to see that Tara’s excitement for education will live on to help children recognize their dreams. In Tara’s memory, they will be given the opportunity to succeed.